“You are not the kind of guy who would be at a place like this at this time of the morning.” 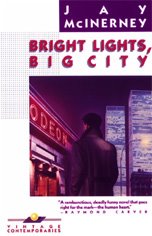 That’s the line that kicks off Jay McInerney’s Bright Lights, Big City, his 1984 debut novel. I first read BLBC in 1986 as part of my freshmen American Literature course at the University of Alabama. I had never read anything like it, especially a book that was written entirely in second person. I was fascinated by that (and in a future fiction writing class even gave a shot at writing a second person short story). The story is a simple one, a young man gets a job at a prestigious magazine, where he checks facts but what he really wants to break into their fiction. At night he is out prowling New York clubs, doing drugs, lamenting that his wife left him and wishing he was back in his apartment working on his novel. Along the way, he’s talked to daily on the subway by the Coma Baby, which is big news in the paper, tormented by the memory of his deceased mother and a younger brother who is looking to make a connection.

McInerney waves such vivid pictures that you just fall into this young man’s life and you pull for him to start making the right choices in his life. I’ve read this book a few times since college (and it’s a quick read at just 208 pages). 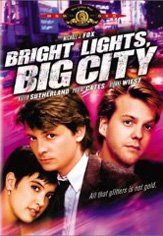 In 1988, BLBC became a big screen movie starring Michael J. Fox as Jamie (for the sake of the movie “you” got a name), Keifer Sutherland as best friend Tad and Phoebe Cates as wife Amanda. McInerney wrote the screenplay for the film, yet it really fell flat as it never captured the energy and overall feel of the novel. Part of the problem may actually rest with Fox. For him this role was an effort to break out of “kid” roles (he was still on Family Ties when this came out and had already done the first Back to the Future movie and Light of Day had already flopped) and it just didn’t work for him. Plus, the scenes around the Coma Baby were just silly. To be clear, I don’t geek out over the movie. But it seemed wrong to not make mention of it. 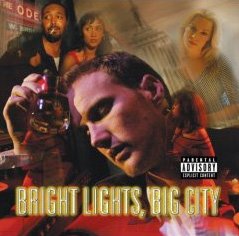 Another part of BLBC I do geek out over though is the musical. In 1999, Paul Scott Goodman’s show made it’s world premiere at the New York Theatre Workshop, the place where Rent was born. In fact, the show featured Rent‘s director, Michael Greif and much of the same behind-the-scenes crew. I caught the final performance of the show. It was good, it wasn’t great by any stretch. Among other issues, Goodman served as a narrator which was completely unnecessary. But, the musical, unlike the film, at least got the feeling right and generated some really good songs. It was also the NY stage debut of a fresh-from-college Patrick Wilson, who has since gone on to a solid stage and screen career, starring in The Full Monty on Broadway and having lead roles in The Phantom of the Opera movie as well as last year’s acclaimed Little Children.

Jump forward a few years and the BLBC musical was reworked and while I haven’t seen the new version, I’ve read some good reviews on it. Plus, it spawned a CD in which Wilson returned to sing the lead role (he was just about the only thing in the original production that got good reviews). The CD also features a great cast with Jesse L. Martin, Sherie Rene Scott, Christine Ebersole, Gavin Creel and Eden Espinosa. I absolutely love the CD and hope to one day see the show again.

And, proving that you can find anything on YouTube, here’s a look at the musical, the newer version staged in Philadelphia. This features Jamie out at the Odeon…

For BLBC newbies, I recommend skipping the film, but check out the novel and the CD. It really captures a side of New York in the 80s that is interesting, plus you’ll meet some strong characters.