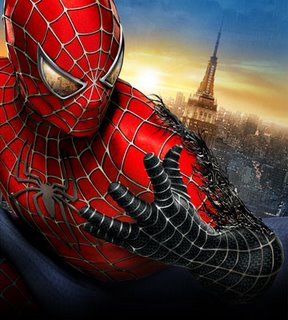 Artwork like this, along with some high-energy trailers, made me excited for Spider-Man 3. Unfortunately the movie could not live up to its hype, not even close. At nearly 2 hours and 30 minutes in length, the movie had about 30 minutes of story that I found truly interesting and maybe another 30 minutes of cool battle/special effects scenes. That left more than an hour of additional movie that at times was either pretty boring or laughably ludicrous.

The plot that worked for me was the resolution between Peter Parker and Harry Osborn. It was perfect and could have easily been a larger component of the movie. One I would’ve enjoyed more than some of the other plots.

Speaking of plots, there are at least four other primary plotlines in play here, none of which take flight: the Sandman (decent, could have been better), Peter battling the black goo that unleashes his dark side (interesting, but didn’t Peter battle his demons in the last movie too?), the other guy who gets gooed and becomes Venom (happened so late in the movie I sorta didn’t care) and Peter and MJ trying to figure out their relationship (should’ve cared about this a lot, but it just wasn’t working).

As for ludicrous, just watch Peter make a fool of himself in the jazz bar when he’s trying to make MJ jealous. That scene is one of the most painful, ever.

This movie fell into the same trap Batman Returns did back in 1992. More villains, more plot turned into completely overblown and dull. If there is a Spider-Man 4, we can only hope they go back to basics instead of going for the bigger-is-better method of sequel making.