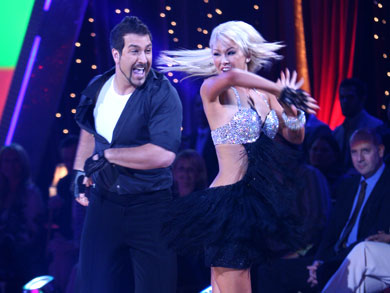 Dancing with the Stars delivered the best show of the season so far tonight with every star doing some solid work. Unfortunately, this is the point in the competition (there are only three more weeks to go) where you expect great things from everyone since there are fewer choices on who can end up in the bottom two. You can tell the judges are really expecting the dancers to pull out all the stops. Len was relentless on Apolo, claiming both of his dances were good but not great. That hurt him in the scoring at a time when he can’t afford to not constantly build on his previous weeks.

This week everyone did two dances, a ballroom and a Latin. Here are my rankings for this week:

As for who is leaving… It’s a difficult call this week. Bottom two could go to John, Billy Ray or even Ian depending on where the strongest fan-base is. I think Billy Ray will be spared the red light and we’ll find John and Ian there. After three times in the bottom two, John will depart.

Post Results Show Update: Excellent performances this week. Meatloaf was great. His songs are so dramatic that they translate perfectly to the ballroom. The youth performance was also fun. We’ll see those dancers as the pros somewhere around season 20. “DanceCenter” with Kenny Mane and Jerry Rice was also fun, albeit it seemed to drag on just a bit too long. In terms of the eliminations… I missed by half again. John was a shoe-in to the bottom two, but Billy Ray took the other spot. And after three weeks in the bottom two, John finally went home.