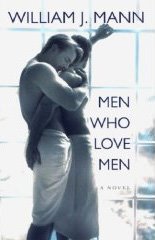 In Men Who Love Men, novelist Jeff O’Brien and his partner Lloyd Griffith run a guesthouse in Provincetown and are about to get married (these guys were central to Men from the Boys). However, they are only a subplot. The main focus here is their best friend, and employee, Henry Weiner who is going through a mid-life crisis. After a string of boyfriends who stay for less than a year, Henry is convinced he won’t find Mr. Right. Sadly, Henry spends most of the book in “woe is me” mode which begins to wear thin before the book is half done. In fact, I almost bailed out on this all together, but I stuck with it because the subplots where interesting. Not only is there Jeff and Lloyd’s impending wedding, there’s a mystery around the guesthouse’s new houseboy, why does Gale keep turning Henry away at the last minute (and, for me, a bigger and frustrating question is why is Henry so dense that he can’t figure out what’s up with Gale) and why Jeff’s nine-year-old nephew is so sullen.

It’s hard to listen to a friend who just keeps whining without taking decisive action for themselves. And this novel really pushed my patience on that score. I am glad I finished it because the final couple of chapters bring satisfying closure but it felt like a long road to get there.