You Can’t Stop The Beat 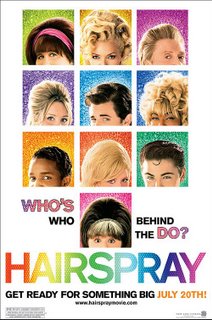 Reading Entertainment Weekly’s Summer Movie Preview over the weekend, it struck me how few summer movies I’m really excited about (getting back to the criteria of “does it look like it’s worth $22”).

I’m definitely in for Spider-Man 3, Harry Potter and the Order of the Phoenix, The Bourne Ultimatum, The Simpsons Movie, Fantastic Four: The Rise of the Silver Surfer and The Transformers. I might also be in for Ocean’s Thirteen (although I felt pretty burned by Ocean’s Twelve) and Halloween looked pretty cool when I saw the trailer a couple weeks ago (but I’m worried I’ll be scared senseless too so I might have to wait for DVD so I can watch it in broad daylight).

One other movie I’m going to be shelling out cash for is Hairspray. I am a fan of the original John Waters’ movie from 1988. I loved the stage musical, which opened in 2002. This movie is based on the stage musical and the trailer that was just released last week makes it look like they’ve captured it pretty well. I wish they’d used more of the musical’s original cast (why did John Travolta end up playing Edna instead of Tony Winner Harvey Fierstein?). There is some pretty cool casting in the movie too though. High School Musical’s Zac Efron is pretty-boy Link, Queen Latifah is Motormouth Maybelle and Christopher Walken plays Edna’s husband.

Check out the trailer and all the other movie stuff at www.hairspraymovie.com