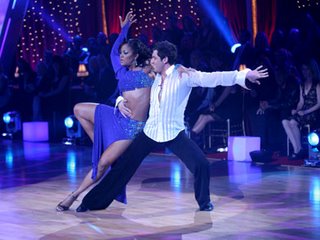 Dancing with the Stars competitors turned it up a notch (and in some cases two) this week as the remaining seven dancers did everything they could to avoid elimination. This was also the first week the dancers had to learn two dances in the single week. Each had to do a Latin number they had not done before and they also had to do a group swing.

The rankings were difficult this week, especially the top 3 because those could be virtually interchangeable. There’s also a pattern forming, at least in my rankings, except for flip-flopping John and Billy Ray in positions 6 and 7, the rest of the order is the same as last week. Here is my rundown:

The group swing last night was fun, although a bit difficult to watch and actually judge. I thought the camera work was a little off, making hard to get an accurate picture of who was doing what. Apolo looked great as the swing really worked for him. His footwork looked really good. The other standout was Laila, who even carried Apolo and tossed Maks, which was very cool. If anything, the group dance farther drove home the same rankings I had above. I wish it had been presented better on TV so I could break it down more.

As for who is leaving… I think the voting public are going to put Heather and John into the bottom two this week (it pains me to say that because I like Heather a lot, but I think popularity-wise this is how it works out). I think John goes home this week.

Post Results Show Update: I was back inline with the voters this week, predicting that John and Heather were in the bottom two. But I am wildly disappointed that Heather was sent home (boo! bad choice, voters!). Good results show over all too. Joss Stone was fun and the Dreamgirls number was fab. Best of all, the group jive was named the dance of the week and danced again. Luckily the cameras captured it better this time and I enjoyed it all the more. Next week, two dances again for the remaining dancers. They will each have to do a ballroom and a latin number, so it will be a fun week!