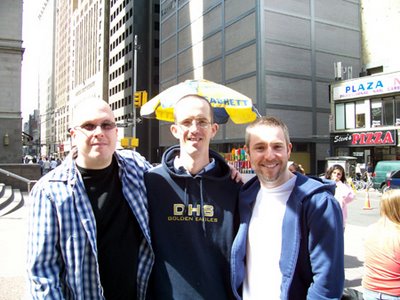 It’s always fun when you get to reconnect with someone you haven’t seen in years. So, when this was in our guestbook on Wednesday it was great to see: “Hey! I’m taking 50-some students into New York Thursday-Sunday this week. I have an itinerary that I can send you if you want to try and run into each other. …maybe us desert-dwellers will bring some sun back into NYC?”

And he was serious about improving the weather. The group arrived Thursday morning and by Thursday afternoon the sun was coming out. It has been gorgeous ever since (as I write this it is 78, sunny and breezy).

So Will and I met up with Michael and some of his students this morning while they were visiting Ground Zero. I played a little bit of tour guide and tossed out bits of information about the site and what was going on. But mostly we got to catch up with Michael and hear about teaching high school, life in the desert, the son he adopted (that was the cool bit of news that caught us off guard… and we got to meet his son later because he was part of the group), and what it has been like being the guy in charge of the 54 kids plus chaperons going around New York City.

We got to spend a couple hours with Michael before the gang had to head off to the UN for a tour. Hopefully he will get to make a solo visit to NYC soon… and a least now we are connected again so we can keep up with each other better!