Tales from C.A.M.P.: Jackie’s Back 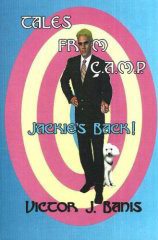 I gave this book to Will for Christmas and I finally pulled it off the shelf to read after he told me how much he liked it. Tales from C.A.M.P.: Jackie’s Back contains three novels from Victor J. Banis featuring his gay super spy Jackie Holmes. Over the years, Jackie appeared in nine C.A.M.P. adventures written by Banis. C.A.M.P. is an organization dedicated to the protection and advancement of homosexuals everywhere. It’s not attached to any one government, but through the three novels in this omnibus edition, Jackie worked with Interpol, the CIA and other agencies to keep the world safe from evil-doers.

The stories in this collection are fun because they cover different genres. Rally Around the Fag is pretty much a straight forward spy story in which Jackie goes undercover (as a woman and, later, as a bullfighter) to prevent a plot that will restart the coldwar, and possibly start World War 3. Blow the Man Down has a sci-fi twist to it as Jackie ends up in Atlantis, trying to prevent the Queen of Atlantis from taking over the world. Gothic Gaye is a ghostly story set in a castle that is believed to be cursed… and it looks like the curse is out to kill Jackie.

These were great, fast reads that I recommend to anyone who likes spy stories, or wants to check out some classic queer fiction.