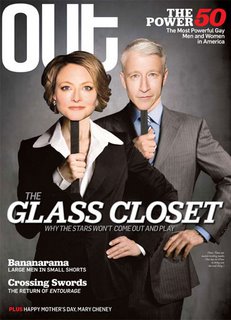 The politics of outing is a complex issue that can’t be fully explored in a single blog entry, but I’d like to comment on a recent incident in the gay press. Earlier this month, certain members of the gay media were all in a tizzy when Out magazine put Jodie Foster and Anderson Cooper on their cover, effectively outing them. Now, it has been common knowledge for quite some time that both Jodie and Anderson are card-carrying “friends of Dorthy”, but neither has ever gone on record and said, “I’m gay”. Some believed that Out overstepped a long established boundary, citing that coming out is a personal and private experience, that it is up to the individual to decide when and how they want to come out. I generally agree with this, but I feel this take on the issue feeds into the antiquated/homophobic idea that declaring your homosexuality will forever destroy your career.

This is simply no longer the case. Take the recent outings of T.R. Knight and Neil Patrick Harris. Were they fired after they came out? Was there a public backlash against them? Did advertisers pull revenue from their programs? No, of course not. They kept their (well-paying) jobs and Grey’s Anatomy and How I Met Your Mother are just as popular as ever. When they came out, they didn’t need a flashy magazine cover story (Ellen’s legendary “Yep, I’m Gay” cover) or a tell-all book (Jim McGreevey’s icky memoir) to trumpet their bravery. In fact, both were matter-of-fact about the whole thing. “I’m gay… so what?”

I think the Internet has a lot to do with this new attitude. Without journalistic integrity to hamper them, bloggers (for better or worse) are free to post and say whatever they want. There’s a refreshing democracy to the way the gossip sites dive into the personal lives of both gay and straight celebrities. Embarrassing photos without make-up or kissing your new lover in front of an L.A. 7-11, why should gay celebrities be exempt from this because the person they’re smooching is of the same sex.

Today at the gym, I encountered proof of the different ways print and online media deal with gay celebrities . In the April 16th issue of In Touch Weekly (I didn’t buy it, someone left it behind… I swear!) there is a story about reality television’s favorite whipping-boy, Sanjaya of American Idol. The story touts “The Truth About Sanjaya” and freely hints about his sexual orientation with quotes about how he dreamed of one day being a beautician and was popular with the girls in school. Yeah, I was popular with the girls too… because I liked to chase the boys around at recess! The article bends over backwards playing the old pronoun game, never saying “he” or “she” when dealing with the subject of his love interests. The point is, that you can hint at someones homosexuality in print, but you can’t come right out and say that they’re gay. Online all bets are off.

So what’s the point of my rambling diatribe? I guess if you’re a gay celebrity, just be honest. No more of this silly/self-loathing “my personal life is private” junk. Coming out isn’t as terrible as you might think. Just keep it real. Your audience will appreciate it.