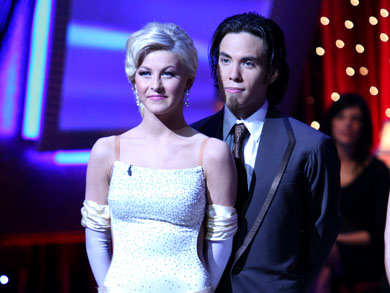 This was the week of redemption for Laila. Her Rumba was fantastic, and the best Rumba of the evening. I’m so glad she and Maks put in the effort to really nail a dance for the first time in two weeks.

And, even more important, my pick for champion, Apolo (shown above from Week 4), posted the first perfect score of the season with their Samba. Their routine was fun, flashy and sexy and I trust they will follow through for the rest of the compeition doing that kind of work. It’s critical now that the season is half over that they keep bringing perfect dances to the floor.

Here are my rankings for the week:

As for who is leaving… This is a hard one to call this week. Realistically the bottom two should follow the judges scores and land Billy Ray and Clyde in the red light with Clyde going home. I would love to see that come to pass. What I think is going to happen though is that Clyde and John end up in the bottom two and John will end up and go home. Sadly, I think the popularity contest will still be in affect and save both Clyde (from going home period) and Billy Ray (from the bottom two).

Post Results Show Update: That were some unpleasant shocks in this week’s show. I was glad to see that John was saved from going home, and even from the bottom two. But I was stunned that Heather ended up in the bottom two! Come on voting people…let’s get this right! You could see that Billy Ray was stunned that he wasn’t standing in the red light. At least the ultimate choice was right and Clyde went home (I’m glad I was wrong in my pick and that some justice prevailed with this week’s voting).

It was cool to see Lisa back as well, trying out her Chicago routine. Looks like she’ll make a pretty decent Roxie. Next week the stars tackle two dances…they will be doing a dance they haven’t done yet, and they’ll also have to do a group dance. I can’t wait!