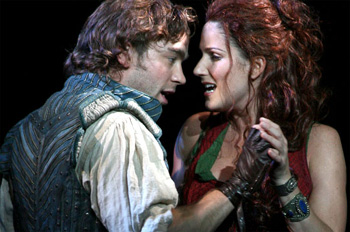 We had a rare Saturday night date night due to my light hockey schedule today. Appropriately enough for St. Patrick’s Day, we saw the evening performance of The Pirate Queen. It’s a new musical from the writers of Les Miserables and Miss Saigon and the producers of Riverdance. It is the true story of Grace O’Malley who was a woman ahead of her time—she was both a pirate ship captain and an Irish chieftain. Grace was determined to fight for her the freedom and livelihood of her clan against the English who were slowly taking over Ireland during the 16th Century.

While there are several components that are quite good, the show mostly falls flat. Stephanie J. Block (who we last saw playing Liza Minnelli in The Boy from Oz) is fantastic as Grace. Block knows how to play this strong-willed woman and she is truly the glue that holds the show together. She also has some good songs to show off her voice. When the music is infused with Irish instruments and rhythms, its is exceptional. And the Irish dance numbers are stunning… it’s too bad there aren’t more of them. 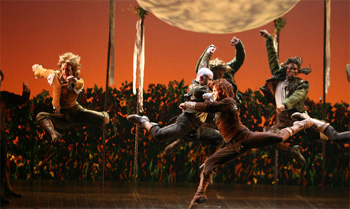 It’s surprising that a story about such a strong subject could produce something that is more bland that not. The show is two weeks into four weeks of previews, plus they had a few weeks playing in Chicago so you would expect a much stronger show. One of the biggest clunkers in the staging was the first fight sequence when the British boarded the pirate ship. It truly seemed like everyone was out of step, making the sequence made no sense. Plus, the book itself is just plain dull. It calls into question how strong the musical’s writers really are. If you look into their past, the had super strong source material with Les Mis (a Victor Hugo novel) and Miss Saigon (which retold Madame Butterfly). In the case of The Pirate Queen, they do cite an Irish work as their source but it may not have had the strong narrative found in their previous source works.

Will had the idea that the whole thing should be restaged as a mostly dance show. When Riverdance was on Broadway a few years ago, they had a very cheesy, new-agey story with very strong dance. What if that cheesy story was replaced with the story of Grace O’Malley? Will even suggested that the book for that show could be quite minimal, such as Billy Joel’s Movin‘ Out was.

The Pirate Queen officially opens on April 5. It will be interesting to see if the show can gel more over the next couple weeks… and what fate the critics will bestow. Given what we saw last night, I’d say Block comes out on top, but the show itself sinks.