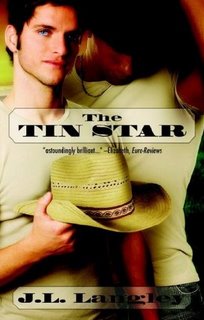 One of the books I got for Christmas was The Tin Star by J. L. Langley. I read it over the course of the last week and it was a fantastic. The novel opens with Jamie Killian being kicked out of his home, as well as his ranch foreman job, by his father. The reason? Dad is not thrilled with the news that Jamie, his youngest, is gay. Jamie gets refuge from fellow ranch owner, and friend, Ethan Whitehall. Jamie’s coming out then leads to Ethan’s as the two fall in love and build a life together.

Over the course of the story, Ethan and Jamie have to overcome those in the Texas town who would rather they leave, with the most vocal (and dangerous) opponents being Jamie’s father. It sounds like a simple story, and it is. But, Langley weaves the right combination of romance, drama and unexpected peril to make a book that is hard to put down. I’ve been a fan of cowboy-in-love stories for a while now (I enjoyed the genre before Brokeback Mountain made gay cowboys fashionable) and this one is a great story. Langley crafted a complete story here, but I would love to see a sequel to check in on the further adventures of Cowboy & Blue Eyes.

Update on 1/12: Will found a sequel… well not really a sequel… it bills itself as “an interlude.” The Christmas Tree Bargain jumps forward about three years from the end of the novel and focuses on Christmas with Ethan and Jamie. It is only an 8 page ebook (meaning it is available in pdf and a couple other formats), but it was nice to read a bit more about these characters.