Wow! It got hot outside today, so we retreated for the morning to the Olympic pool complex to watch some swimming heats. That was a good time, and a nice place to stay cool. We also went out and explored the Village a little bit, that’s the gay part of Montreal (similar to Chelsea in NYC or Castro in SF).

One thing about the heat, at least it’s not as hot here as it is at home. As I write this it’s 94 feels like 105 in NYC, but here it’s 90 feels like 99 and there’s a decent breeze. This heat only lasts a couple of days, tomorrow it is back to 85 and then Thursday it’s in the 70s with the rest of the week in the low 80s.

Today we also met Mark Tewksbury. I wrote about him back on Saturday because he was at the games presenting the Declaration of Montreal, as well as representing the Outgames because he is the co-president of the event. He was signing his book, Inside Out: Straight Talk from a Gay Jock, at the Outgames boutique in the Village. He was great! We even talked a little bit about how great the hockey was—that they had inlaid the logo in the ice and were announcing goals. 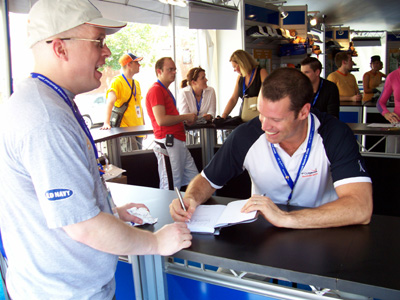